If you want to escape from the city without going too far, the Boston Harbor Islands are great option. Spectacle Island is the closest and perhaps the most popular of the islands. It’s only four miles away from the city and is easily accessible by ferry.

Here’s everything you need to know about spending a day on the island. 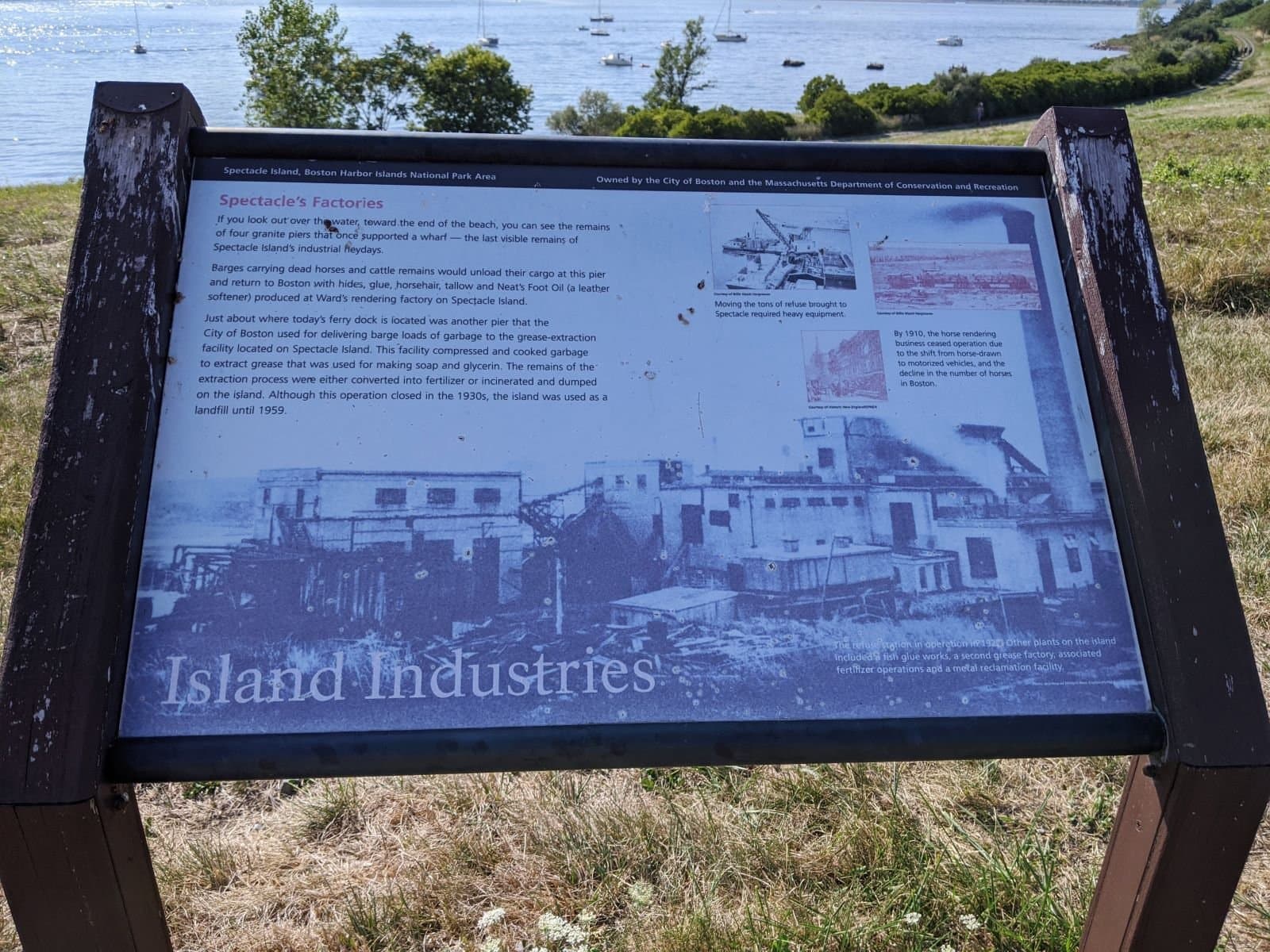 Spectacle Island has quite the history, and it’s not very glamorous. Indigenous peoples used the island as a dump for shells and fish bones for around 1,000 years. (Massachusetts is the original homeland of the Mashpee Wampanoag, Aquinnah Wampanoag, Nipmuc, and Massachusett tribal nations.)

The island later went on to house a quarantine hospital, glue factory, and two resorts that were shut down for illicit activity. In the 1920, Spectacle Island once again became used as a dump, which was later closed in 1959. The island was notorious for its horrible smell, and the stench was so strong that ship crews were said to use it to help them navigate on foggy days.

It was only in 1993 that construction on Spectacle Island began, with the hopes of transforming the space into a park. Workers covered the trash with soil and planted thousands of trees and shrubs.

Today, Spectacle island offers five miles of trails, a sandy beach, food, and cultural events. In non-Covid years, there are events like yoga classes and an annual 5k.

How to Get to Spectacle Island

You can take a private boat or the Boston Harbor Cruises ferry. The ferry runs a few times a day in the warmer months, and tickets cost $25 round-trip for adults, $23 for seniors, and $18 for kids. Tickets can sell out, so buy yours online in advance if you want to guarantee a specific time.

The ferry can get a bit crowded, so line up early to get a seat. The trip takes around 20 minutes one way, but boarding and deboarding can also take some time.

To get the best views of Boston on the way to the island, try to stay near the back of the boat. On the way back to Boston, go towards the front. You can get some pretty sweet views of the city skyline!

Things to do on Spectacle Island

To be completely honest, there’s not a ton to do on the island—the large majority of the space is grass and shrubbery. But if you’re looking for a relaxing day in the sun and great photo ops, Spectacle Island is your place. Here are some ways to spend your day on the island

Note: You can’t stay overnight on the island. Camping is only allowed on Peddocks, Bumpkin, Grape, and Lovells Island. Camping books out months in advance in non-Covid years. In 2020, there was no camping at all due to the pandemic, and no ferry service beyond Spectacle Island.

There are 5 miles of trails total on the small island. The path along the perimeter of the island is 1.9 miles and ADA compliant (it’s not paved, but is pretty flat). Along that path, you’ll have the chance to veer out and explore other trails, some of which take you to the top of the two hills on the island, known as the North and South Drumlin. The North Drumlin is the hill closest to Boston. 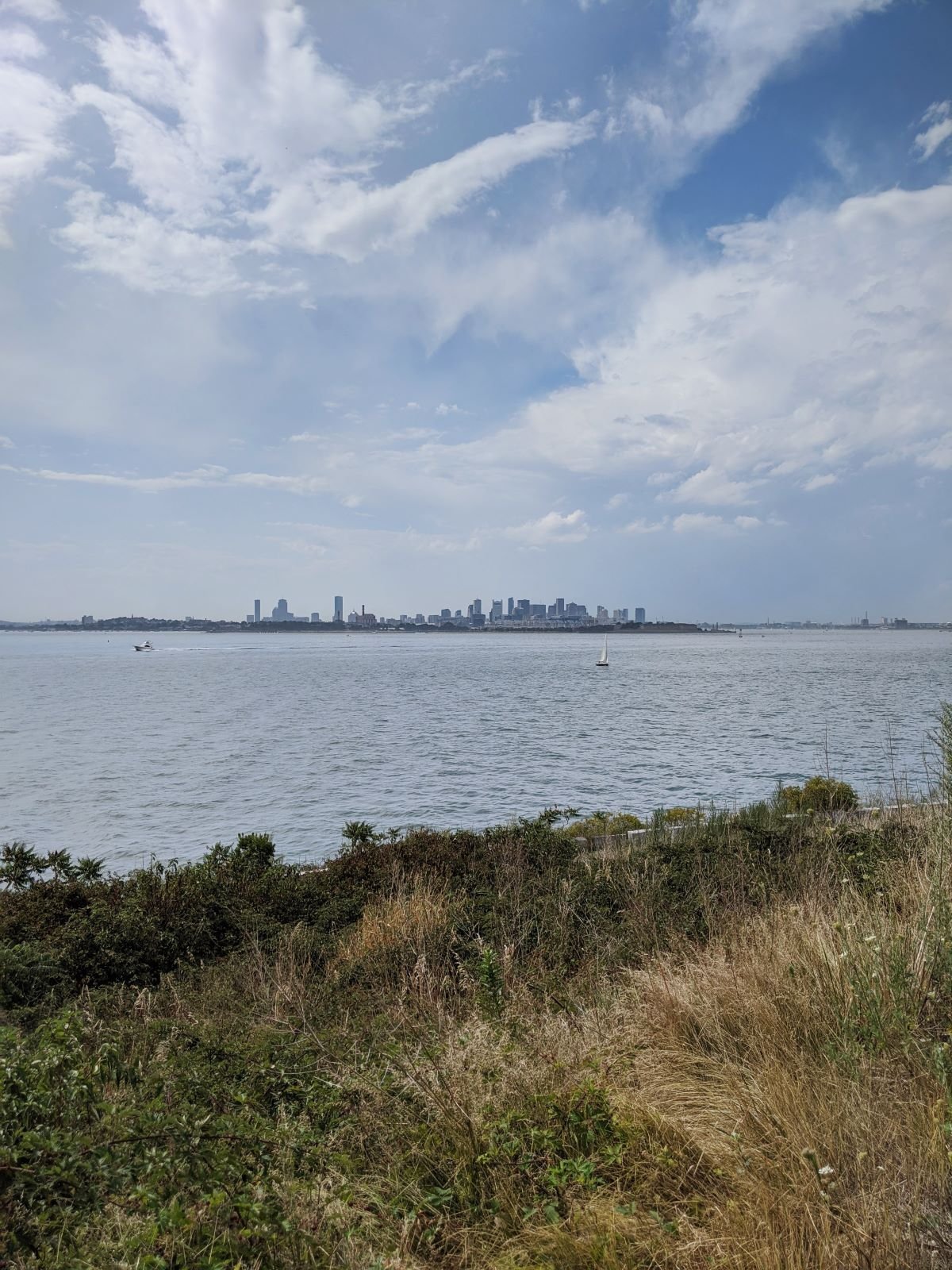 To get the best views of the city, you need to be away from it! Spectacle Island offers an unparalleled view of the city skyline across the water. Find the best views at the pier, beach, and on the tip of the North Drumlin. 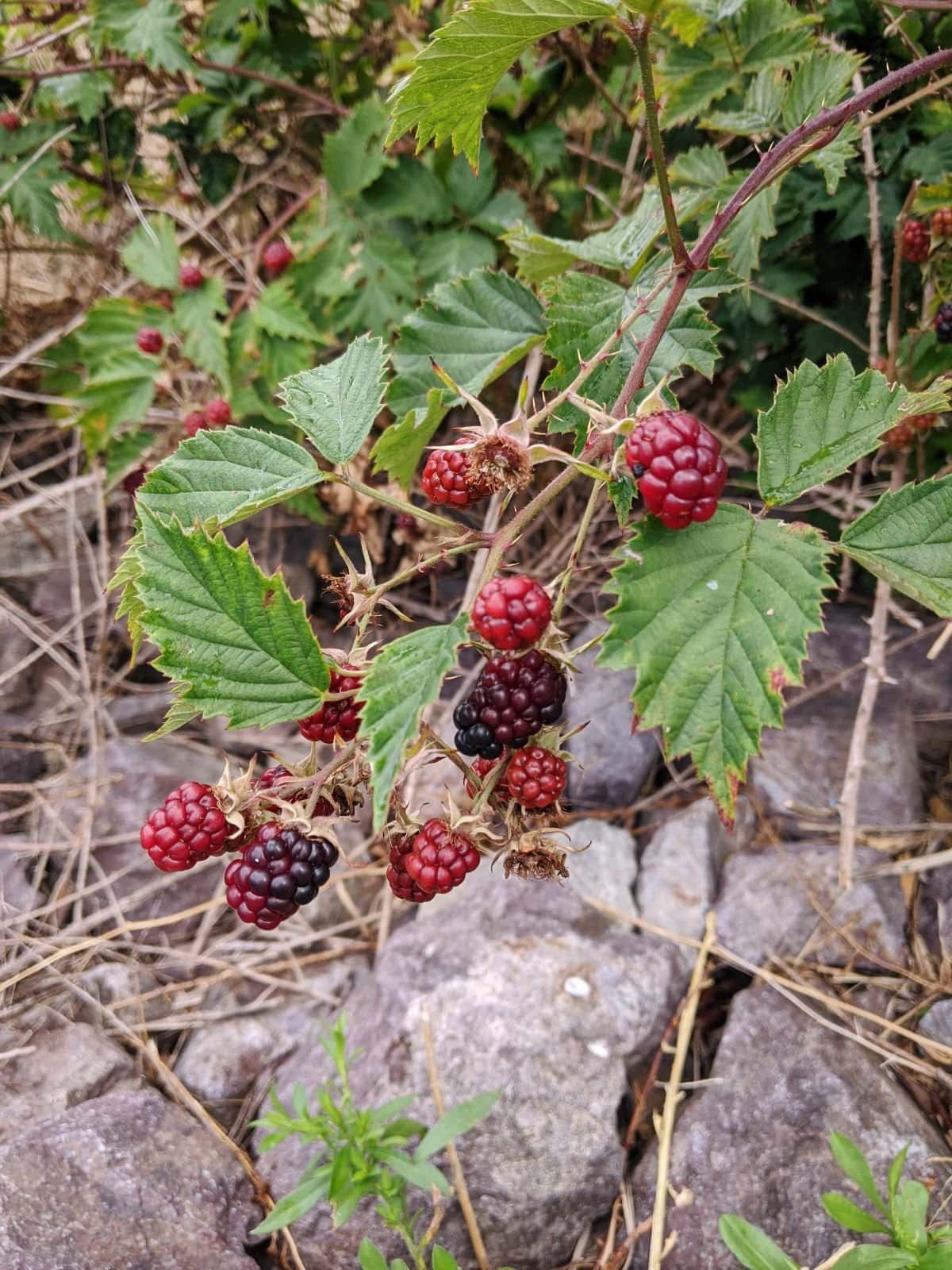 There are wild blackberries all along the island. You can’t miss them if you take a walk around the island from mid-July to mid-August. The bushes are very prickly, so be careful and consider bringing gloves.

The berries themselves are quite good, and I brought an entire bucket to gather them and take them home. There isn’t a lot of wildlife on the island (outside of birds), so most of the blackberries go to waste. The ones in these photos aren’t quite ripe—you’ll want to look for deep purple/black berries that aren’t mushy.

As always, don’t eat anything you can’t properly identify!

4. Swim in the ocean 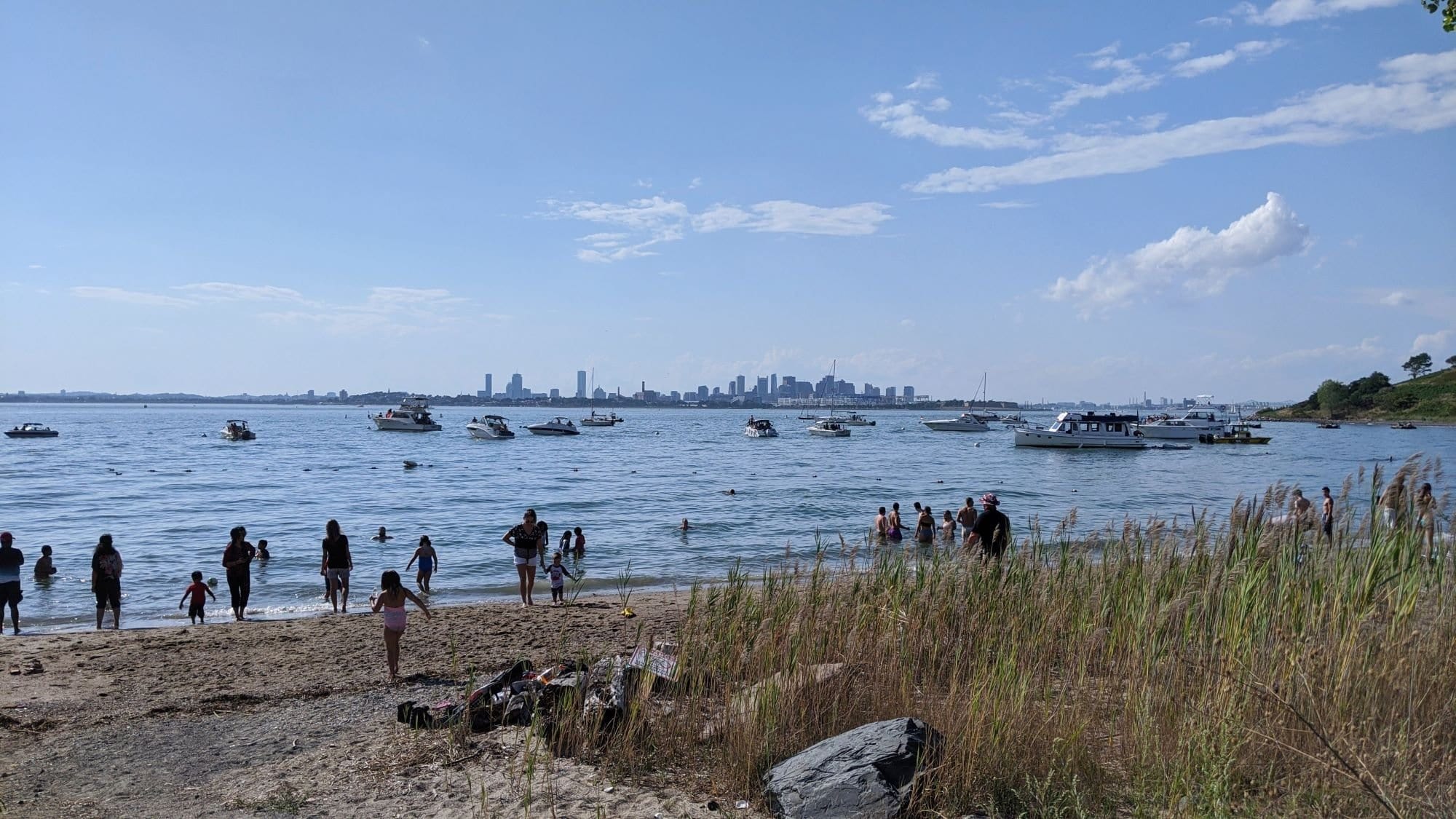 There’s a small, sandy beach right next to the pier, though the sand is mixed with lots of shells. Bring some good flip flops!

The water itself is extremely cold, being ocean water, but it’s refreshing on a hot day. Some visitors have concerns with the cleanliness of the water (the island did used to be a dump), but I didn’t notice anything out of the ordinary.

There are outdoor showers and changing stalls, and there’s a lifeguard from late June to early September.

Spectacle Island is known for its abundance of sea glass, especially along the beach near the dock. Just know that you can’t take the sea glass with you—this policy is in place to allow others to enjoy the hunt for sea glass for years to come. You’re welcome to gather the sea glass, arrange them, and take photos, however.

6. Eat the the snack bar or have a picnic

Spectacle Island has a cafe/concession stand in non-Covid years, and you’ll find typical fast food offerings along with seafood. I imagine that most of the options aren’t super vegetarian- or vegan-friendly, so I’d recommend packing a lunch or snack if you have a special diet.

You could also get takeout at one of the many vegan restaurants in Boston and bring it along. Spectacle Island is perfect for picnics, as there’s lots of open, grassy space. There are no grills, however, so make sure that your food is precooked.

7. Stop in the visitor’s center 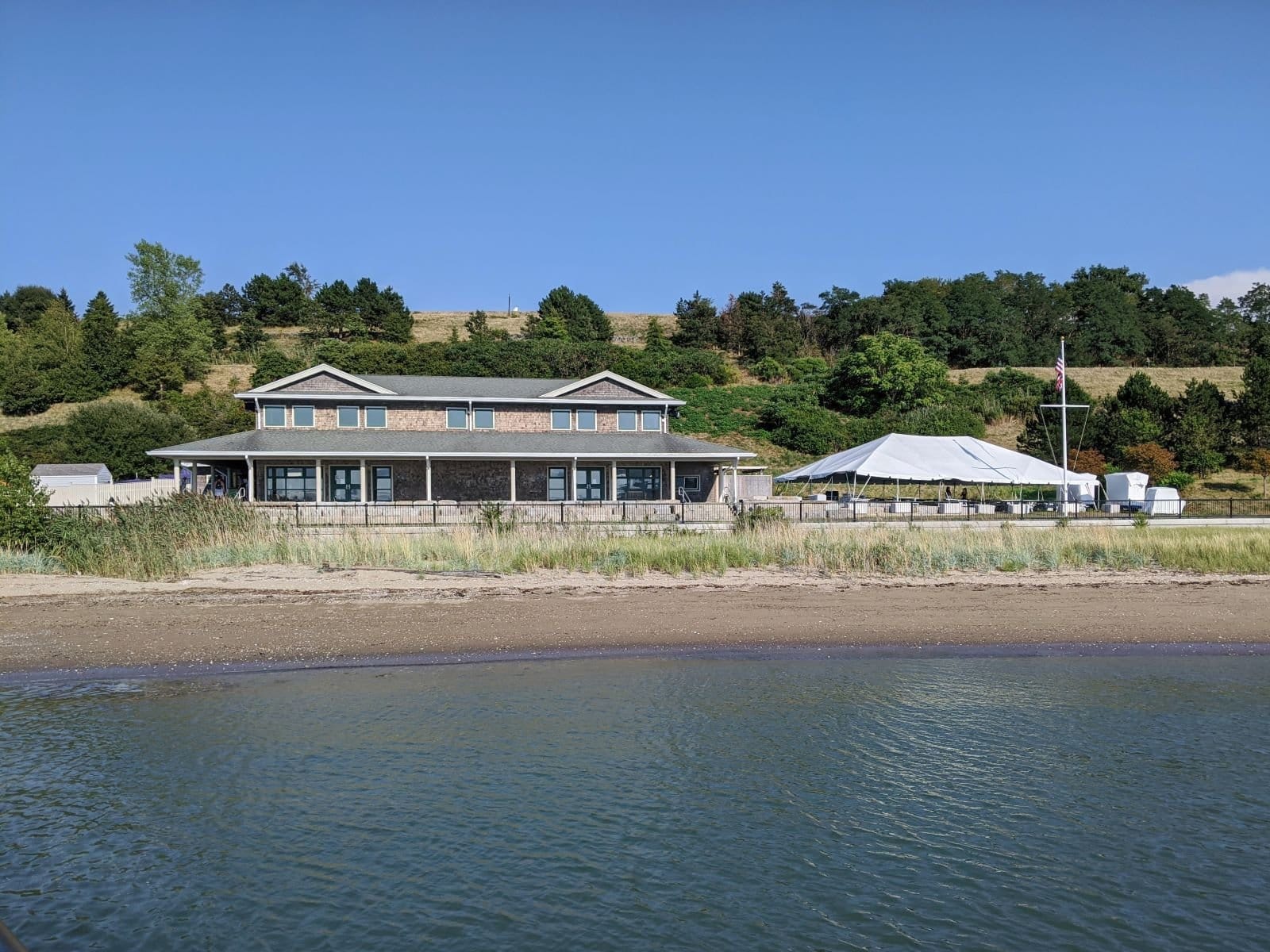 In non-Covid years, the visitor center is open and offers brochures, restrooms, exhibits, and a water cooler. You can learn more about the history of the island by reading the displays and viewing the artifacts.

Things to Pack for Your Trip to Spectacle Island

This section contains affiliate links, meaning that I may earn a small commission on any purchases made, at no extra cost to you. Some links go to Amazon if you’re planning to shop there anyways, but please consider shopping at REI or at a small neighborhood store if it’s accessible to you. 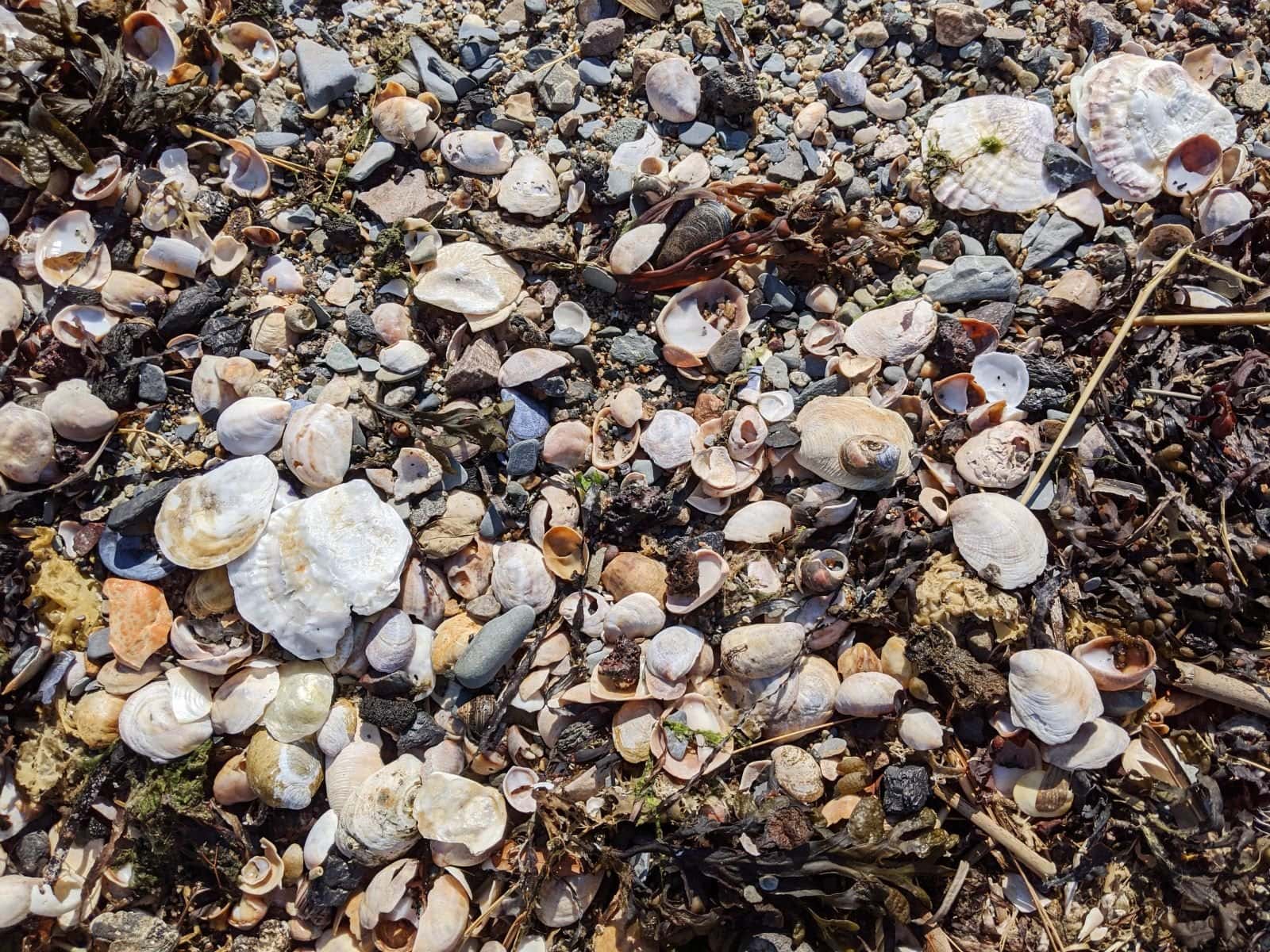 I hope you have a fantastic trip to Spectacle Island!